A Story of Kindness Continued

Learn more about how it all began

In the early 1960s a young British couple, David Blakeway Smith and his wife Sandy, arrived in Mandalay, Burma.

While David began a teaching job in a college, Sandy who had trained at Manchester University to be a Teacher of the Deaf, set about fulfilling her mission to provide a form of support and education for deaf and hard of hearing children in Mandalay.

In the early 1960s a young British couple, David Blakeway Smith and his wife Sandy, arrived in Mandalay, Burma. While David began a teaching job in a college, Sandy who had trained at Manchester University to be a Teacher of the Deaf, set about fulfilling her mission to provide a form of support and education for deaf and hard of hearing children in Mandalay.

In the whole of Burma the only school for the deaf was in Rangoon, some 450 miles away from Mandalay. Sandy had 300 small leaflets printed in Burmese which read:

She duly set off on her bicycle, cycling around Mandalay to distribute leaflets to all and sundry.  Within just a fortnight a Burmese lady with her two little deaf children, aged 6 or 7, appeared at David and Sandy’s house. These were to be Sandy’s first pupils. She began teaching them on the veranda and very quickly more deaf children came.  Before long her little ‘school’ had to move into the middle of Mandalay, to be more accessible to the children who wanted to attend.

Images taken when Mandalay school for the deaf was setup.

Eventually, Sandy was given the use of a small lean-to, bamboo-roofed structure, open on three sides, next to the Diocesan Secondary School. With a table, desks and a blackboard she set up her ‘school’ there. The Bishop of Rangoon called it “Mrs. Smith’s Shack”.

By 1964 the school had grown and 27 deaf children were being taught in the one classroom.  The ages of the children ranged from two years old to eighteen and there were three Burmese teachers whom Sandra was also training.  Learning more Burmese every day, preparing apparatus for the different children and training the teachers meant that her life was extremely full – and she loved every minute.

Then the blow struck.  After just two and a half years in this magical, wonderful country the Burmese Military Government forced all foreigners, including David and Sandy, to leave.  They had collected a little money for the School for the Deaf and appointed Burmese Trustees and a Burmese Head Teacher.  On a sad day in October 1964 Sandy left Mandalay and Burma with her husband hoping that her little ‘school’ would continue but fearing for its future under the new regime.

On arrival back in England the couple who had made many friends in Burma were unable to even write to them. The secret police intercepted all mail and would arrest those who had been in contact with someone from the West. Although David and Sandy never knew what had happened to the little deaf school that Sandra had started they often wondered. 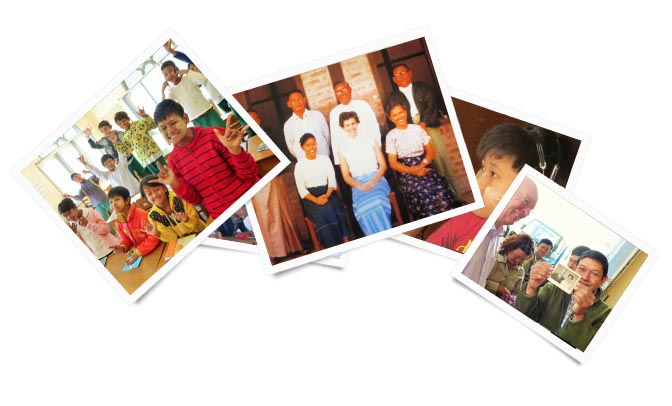 It was just two days later, on May 9th 2013, that a miracle happened. Chris, David and Sandy’s son-in-law, typed ‘School for the Deaf Mandalay’ into Google.  Much to his surprise a magnificent two-storey building appeared – Mandalay School for the Deaf was alive and well. “Mr Smith” was credited as having founded the school!

This overwhelming news just after Sandy’s death, meant that sadly she died without knowing how her school had prospered. The article made no mention at all of Mrs. Smith who was the real Founder and despite his passport having been stamped ‘Leaving Burma for good’, David decided he must try to return to the country to honour Sandy, her memory and achievements, and to explain that it was ‘Mrs. Smith’, not ‘Mr. Smith’, who worked so hard to found this School.

“So, I began again after fifty years to relearn the Burmese language which was a little rusty.” David Blakeway Smith.

On December 9th 2013 David set off on a pilgrimage to Mandalay. He remembers it vividly, “As the plane from Bangkok flew lower and lower, the great Irrawaddy River came into view – I had forgotten how huge it is – one of the great rivers of Asia – over a mile wide yet some 400 miles from the sea. And there below me lay the familiar outline of the city of Mandalay, as beautiful and exotic as ever with its majestic Buddhist temples glistening in gold and white in the sun.”

On arrival the Director General of Social Welfare, who now runs the Mandalay School for the Deaf, gave permission for David to visit the fine new school. David presented the Headmistress with a beautiful photograph of a young 24 year old Sandy from 1962, together with a selection of colour prints of her little deaf school in the 1960s.

A few days later, on another visit to the school, five Burmese people, four men and a lady, stood in the entrance hall of the School. They had all been deaf pupils in Sandy’s first school in 1962! Now aged 58 to 71 they had all had jobs and were retired. Back in 1962, of course, they had all been little children and because they were deaf no-one had taught them. They did not even know then that they had a name or an address! That is, until Sandy met them.

The Headmistress took great pleasure in showing David around the school; we will let him tell you the story of ‘the little boy in blue’.

The Little Boy in Blue

On my tour of the school some of the children began to sign ‘big nose’ in Burmese deaf sign language, exactly as the other deaf children had done in 1962. It seems that I must have a big nose – their ‘nickname’ for me!

Then, in one classroom I noticed that a boy was wearing hearing aids and I commented on this to his teacher.

“Yes, he is a rich kid,” his teacher immediately replied.

Apparently he was the only child in the school who had any hearing aids which are hugely expensive there and well beyond the means of most families.

“Are there are any other children in the school who have some hearing and who would benefit from having hearing aids ?” I enquired.

“Yes, lots – for example this boy here”, she replied and pointed out a little chap in a blue jumper.

“Well, I wear hearing aids,” I began tentatively, removing one.

“Can I try them on him to see if it makes any difference to his hearing, please?” I asked.

I gently placed first one and then the other hearing aid on the little boy’s ears. Immediately, he smiled broadly and to our amazement began chattering away in Burmese to his teacher. He looked so very happy, absolutely delighted. The transformation was quite remarkable.

It was then that I realised that I had a problem, a dilemma.

What do I do now? Do I leave my hearing aids with the boy or, do I take them back from him?!!

I just stood by as everyone waited and watched. I honestly did not know what to do.

Clearly he would benefit enormously if I left my hearing aids with him. However, gradually I reasoned with myself:

His hearing loss almost certainly will be different from mine. Also, my moulds have been fitted to my ears and any moulds for him will not be the same. He needs his own hearing test to give him the correct aids and moulds. In any case, I am going deaf and need the hearing aids myself.

With great reluctance, I gently took them back from him.

When this happened his face changed instantly, he looked totally bereft, shattered. I will never forget the sadness in his eyes when I did this. It seemed as if I had given him a taste of heaven and then immediately snatched it away from him. At that moment I determined that whatever else I did I MUST help him and the other children in the school. In January 2014, on the plane flying back to England, I could not take the little boy’s face from my mind.

On his return, many weeks of enquiries, searching and the help of friends, eventually led David to meet Dr Robin Youngs, an ENT Surgeon at Gloucestershire Royal Hospital, in June 2014. Robin had visited Burma every year for 12 years, where in a Rangoon Hospital he had carried out operations to show Burmese doctors various ENT techniques. Robin had also worked for 25 years with a charity helping deaf children in a poor part of Nepal.

We must give hearing aids to that little boy in blue and others like him.

The plan was to establish a partnership between teachers and doctors in Myanmar who were looking after deaf children and their counterparts in the UK, to raise the standard of health and education of deaf children in Myanmar and, in particular, in the Mandalay School for the Deaf.

The Mandalay School for the Deaf was formally established in 2015.

During an initial visit in March 2015, by David and two senior paediatric audiologists from Gloucestershire Hospitals NHSFT to the Mandalay School for the Deaf, 64 children were given hearing aids and 21 children had a fitting session.

In January 2016, Robin Youngs led a second visit to Myanmar.   He was accompanied by three other ENT Surgeons, two audiologists and a Teacher of the Deaf. At the invitation of the Myanmar Ministry of Social Welfare, the team worked in both the Mandalay School for the Deaf and the Yangon Training School for Children with Hearing Disabilities. During their visit, 149 deaf children were tested and 64 given hearing aids.  Operations were carried out at the Mandalay Eye and Ear Hospital and training given to the Burmese Teachers of the Deaf.  The benefits of earlier diagnosis and treatment for deaf children were shared with Burmese medical staff.

In November 2016 a team consisting of an ENT surgeon, two audiologists and a Teacher of the Deaf visited the Yangon Training School for Children with Hearing Disabilities and carried out hearing tests on 50 pupils. 25 children were fitted with hearing aids for the first time.   The team then travelled to Mandalay where children who had been previously fitted with hearing aids were reviewed and hearing tests carried out on over 50 new pupils.

It is tragic that Sandy never knew how well the School she founded had prospered but her memory and legacy live on in the lives of hundreds of deaf and hearing-impaired people in Burma to whom her school has given ‘a life – a real life’.

David Blakeway Smith died in 2016 but the Mandalay School for the Deaf lives on under the guidance of Dr Robin Youngs with a group of dedicated Trustees, audiologists and Teachers of the Deaf.

To improve the lives of children in Myanmar who are born with hearing problems – or grow up to be affected by deafness.

Deaf children in Myanmar deserve help.  Our partnership so far has been a catalyst for positive change.  Please help us to do more.

We rely on the kindness and charity of good hearted people everywhere – If you have any way to contribute to our cause we will be most grateful.